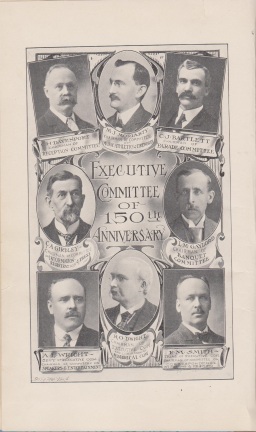 (Photo taken from Sesqui-Centennial Anniversary Celebration of the Town of South Hadley, Massachusetts. The center right photograph is of Lewis M. Gaylord.)

In keeping with my last post, today I’ll tell you about another South Hadley celebration: the 150th anniversary. South Hadley’s actual 150th anniversary was on April 12, 1903, but that year it was decided to hold the celebration during Old Home Week at the end of July instead, in order to allow time to prepare. At a special Town Meeting in January, they had appointed a committee to tell them whether or not holding a celebration was a good idea. The committee reported back to them at the regular Town Meeting on March 16, so using the actual anniversary would have resulted in having slightly less than a month to organize the entire party. The celebration was put off to the Wednesday and Thursday of Old Home Week, July 29 and 30, 1903.

The planning of the celebration involved several members of the Gaylord family. Henry E. Gaylord was on the Committee on Speakers and Entertainments, Lewis M. Gaylord chaired the Banquet Committee on which Clara N. Gaylord sat, Elizabeth Gaylord sat on the Historical Collections Committee, and Frances C. Gaylord sat on both the Reception Committee and the Committee on Publication. No other family had as many members involved with the various planning committees. (As the library was opened only a year later, construction must have been underway at the time, so they were active in this planning while their family was also building this library.)

The celebration was divided into one day for speech-making, toasts, and church exercises, and another day for less formal entertainments such as a parade and a ball game. The town elected to invite “Mother Hadley, Sister Amherst, and Daughter Granby” to join in the festivities, and throughout the chronicle of events there are frequent references to the close relationship between South Hadley and those three towns.

July 29th dawned humid and gray, although the rain did not fall until the afternoon. Since this was the day of indoor solemnity, the rain didn’t matter very much, although I imagine sitting in a crowded church on a warm, humid day was not the most comfortable. The morning involved prayers, speeches, poetry readings, and the singing of hymns. The speeches were largely in praise of the town’s history and its status in the speakers’ eyes as the quintessential perfect American town. Everybody then went to partake of the banquet, during which there were so many toasts of such length that it came time for the afternoon band concert to begin before they had finished all of them, and some had to be postponed to the evening reception.

July 30th featured a concert by Colt’s Armory Band, followed by a “floral parade” which consisted of horse-drawn floats bedecked with flowers and bunting. Mrs. Henry E. Gaylord and Miss Gertrude Gaylord rode in the parade in a carriage bedecked with yellow roses. After the parade, the fire departments of South Hadley Falls, Chicopee Falls, and Holyoke competed to see who could shoot a stream of water the highest into the air, and South Hadley falls exhited an antique fire engine. This was followed by yet more speeches, as well as a telegram from Chu Pau Fay, who had been educated in South Hadley before going to teach in China.

This was followed with a ball game and, as there have always been on the Fourth of July, many fireworks to end the night.

(Information comes from Sesqui-Centennial Anniversary Celebration of the Town of South Hadley, which was published by the town in 1906 in commemoration of the 1903 anniversary.)

Today we read the book Five Green Speckled Frogs and played Little frog under a log game. We then made our own Speckled frogs. One patron let me take a video of her singing the song. Hop on into the library every Friday at 10:30 for story time and craft!
What a wonderful day for some outdoor games!
Today’s story was The Very Hungry Caterpillar by Eric Carle. We then made our own caterpillars and butterflies. Join us for story time on Fridays at 10:30.
TODAY at 10:30! Kids of all ages (& their grown-ups) are invited to listen to a story about the nature all around us and then venture on a walk around the library to see what we can find!
Special thanks to the Town Reminder for featuring our Altered Books Exhibit! TODAY is the last day to see these works of art in person! The library is open from 10am-noon & it’s a beautiful day. Come visit!
We had a lot of fun at story time today. We read Eric Carle’s The Tiny Seed and then made our own flowers. Join us every Friday morning at 10:30 for a story and craft.