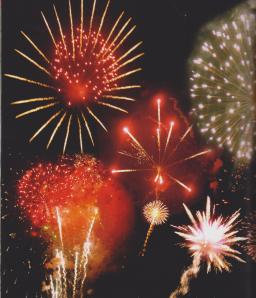 The Fourth of July celebrations this year included not only the traditional fireworks, but also popcorn, face painting, a trampoline, fried dough, and musical performances, all put on at the Michael E. Smith Middle School on the evening of the third. The excitement attracted a sufficient crowd of people for the enthusiastic applause and cheering after the fireworks to be heard several streets away.

This exuberant celebration has a long history in South Hadley, although it was not always tradition: Sophie Eastman, in her book Old South Hadley, briefly decries the “noisy demonstrations” the holiday had fallen to and tells us how the day was originally celebrated with sermons and patriotic songs intended to remind everyone about the heroism and suffering of the soldiers in the Revolutionary War, which were then followed by a good dinner for the town. Accounts differ as to whether the holiday was first celebrated in South Hadley in 1776 when the Declaration was signed or 1783 when it became a national holiday—it didn’t become a legal holiday until 1941.

By 1882 the sermons had fallen by the wayside and the celebrations were done by local organizations rather than by the town. The festivities that year included a parade, a concert, a ball game, and a dance as well as the ever-present fireworks. Eastman was right to consider the celebrations noisy—while the particular elements of the festivities changed from year to year, they were always loud and always included fireworks. Irene Cronin recounts an anecdote whereby the fireworks were even used as a demolition tool. A clothing company had posted a sign which was locally reviled on an island in the river and refused to remove it. Some local boys took blasting powder, kerosene, and a long fuse and placed them underneath the sign late at night on July third, which they then lit the morning of the fourth, destroying the sign. Although a $100 reward was posted for information leading to their arrest, they were never caught.

While this incident did not lead to any damage or loss of life, there were other incidents with fireworks that did, and Massachusetts eventually banned the sale of fireworks. Instead of everyone shooting off fireworks every which way, firework displays by professionals became common, as we had here the night of the third. While our other amusements have again changed—I can’t recall the last time I heard of a celebratory game of quoits as part of a Fourth of July celebration—we still have the fireworks.

(Irene Cronin recounted her story in the 1993 Hampshire Weekend Gazette in the article “Feting the 4th in the Past.”)