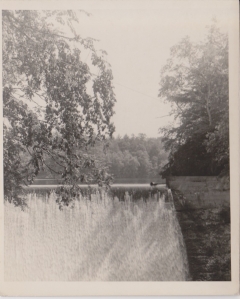 The Inclined Plane Canal of South Hadley seems to be in the air at the moment. Last Thursday, the Library began offering plaques for sale which feature the canal and the words “Welcome to South Hadley.” (For those interested, the painted commemorative plaques are available for $20, $2 of which directly benefits Gaylord Memorial Library.) Indubitably inspired by the plaque, a patron also brought up the canal in a conversation last Friday. Finally, this Tuesday, I heard it mentioned in my biology class, in tangential connection to geology, Darwin, and monetary profit. As a non-resident of South Hadley and firmly cloistered in my studies, I had not the slightest idea of what an “inclined plane canal” entailed, much less what one was doing in South Hadley.

According to Alice Morehouse Walker, whose knowledge of Hadley truly is amazing, the inclined plane canal began construction in 1792 (1906: 109). The impetus for such an endeavor was a company, “The Proprietors of the Locks and Canals on the Connecticut River.” At the time, the Connecticut River facilitated transportation considerably (more articles to follow regarding the River). As Walker writes, “this natural waterway formed a connecting link between the isolated villages by means of which they were kept in touch with each other and in communication with the outside world” (1906: 109). Lumber was rafted down river, in addition to “farm produce, shingles, ash plank, furs and fish” (Walker, 1906: 107). Once downstream, the rafts and boats had to be poled up stream. “Poling was the hardest work known and caused much lameness and blistering of the skin in front of the shoulder, for which a frequent application of rum was a remedy” (Walker, 1906: 108). Furthermore, in South Hadley, “The Connecticut River had a fall of about fifty-three feet in the two and one half miles of rapids” (Taugher, 5). An inclined plane canal, in this context, is justifiable.

Building the canal was a daunting task, and back then, no canal had ever been built in the United States. “Gun powder was the only explosive known and drilling was done by the hands of man” (Walker, 1906: 109). The channel for the canal went through solid rock for two and a half miles and at its narrowest, was 20 feet wide (Walker, 1906: 109; Taugher, 4-5). Dutch enterprisers, who would certainly profit from increased commerce as well as the anticipated tolls, supplied the majority of the funding, but money was apparently scarce at the time (Taugher, 4). In addition, because of the drilling, water flooded nearby fields and meadows, “produced fever and ague, and indignant citizens clamored for the removal of the time [while] Those interested in the fisheries demanded a fishway that the shad might go up the river to their spawning shoals” (Walker, 1906: 109).

Furthermore, the mechanics of an inclined plane canal vary, most in terms of power sources. For example, “In the inclined plane proposed by Fulton, the boats, being placed on carriages while in the water, were drawn over a ridge having a slope in both directions, by a force derived from a vessel of water descending in a vertical well. A similar double plane was used by Kitchell on the Morris Canal, but the power was derived from a water-wheel” (Renwick, 1840: 177). “The Proprietors of the Locks and Canals on the Connecticut River” decided to opt for this second power source: “The wheels [of the canal] are turned by a large trundle wheel, fixed on each end of the shaft of water of sixteen feet in diameter, and this water wheel is put in motion by water supplied by a small reservoir” (Morse, as quoted in Taugher, 6-7). For every pound acting on the water wheel, 24 pounds could be lifted by the canal (Taugher, 7). A carriage was thus moved up or down the incline, which was stone enhanced with wooden planks (Taugher, 5). As the first of its kind, the canal opened in January 1795 to much appreciation: “Even the cold of the early winter, the people of the region surrounding the canal had a holiday and gathered in large numbers to admire the great work done and to ride and down the inclined plane in the grand carriage” (Taugher, 5). Even despite high running costs, a false criminal accusation, and much repair and maintenance work, the canal continued to assist boats up and down the Connecticut River throughout the early 1800s. Unfortunately, in 1848, other methods of transportation took precedence, and the canal closed for transportation. 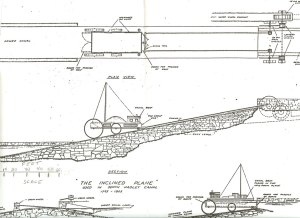 The above photo is courtesy of the South Hadley Historical Society.